Uneven regulation of reduced-risk products influences companies’ opportunities for tobacco harm reduction, but that shouldn’t let companies off the hook

Building the acceptance of reduced-risk products in global regulatory regimes is necessary to further enable tobacco harm reduction. Currently, there are several markets where one or more alternative categories are either banned from sale or not marketed due to gaps in regulations.

Snus is banned in many high-medium income countries, including Australia, Russia, Turkey, and all European Union (EU) member states apart from Sweden, which obtained an exemption when joining the bloc in 1995. Outside of the EU, Switzerland lifted its ban on snus in 2019, motivated by the low risk level associated with the product, signaling the changing attitudes towards the product in some parts of the world. In the US, Swedish Match AB (Swedish Match) was the first company to be granted Modified Risk Tobacco Product (MRTP) designations for snus by the US Food and Drug Administration (FDA).

Heated tobacco is also banned in some parts of the world. The index countries that are affected by such prohibitions include Australia, Brazil, China, Ethiopia, India, Thailand, and Turkey. However, the US Food and Drug Administration (FDA) approved the marketing of Philip Morris International Inc (PMI)’s IQOS as a Modified Exposure Product in 2020, which could influence other countries’ regulation of the product. This is only the second product ever to be authorized to make a modified exposure claim by the agency, after snus.

Companies still have an opportunity to responsibly develop and offer reduced-risk products that are permitted for sale.

There are also notable differences in the regulation of e-vapor products (e-liquids and cartridges). For example, e-vapor products are banned in a large part of the Americas, including in Argentina, Brazil, and Mexico, as well as in Thailand and Turkey. Other countries, such as Australia and Japan, prohibit only the sale of nicotine-containing e-liquids and cartridges, rather than the devices that use them. India introduced a ban on production, import, and sale of e-vapor products in 2019. In contrast, other countries are gradually loosening restrictions on cartridges and e-liquids. In Saudi Arabia, the government recently allowed the sale of these products with certain flavors only.

The index recognizes that the context in which companies operate varies significantly from country to country and that this affects individual companies’ strategies, performance, and ultimate pathways to industry transformation. However, this should not limit the industry in pursuing tobacco harm reduction strategies on a global scale. No countries ban all reduced-risk alternatives, which suggests that companies still have an opportunity to responsibly develop and offer reduced-risk products that are permitted for sale. 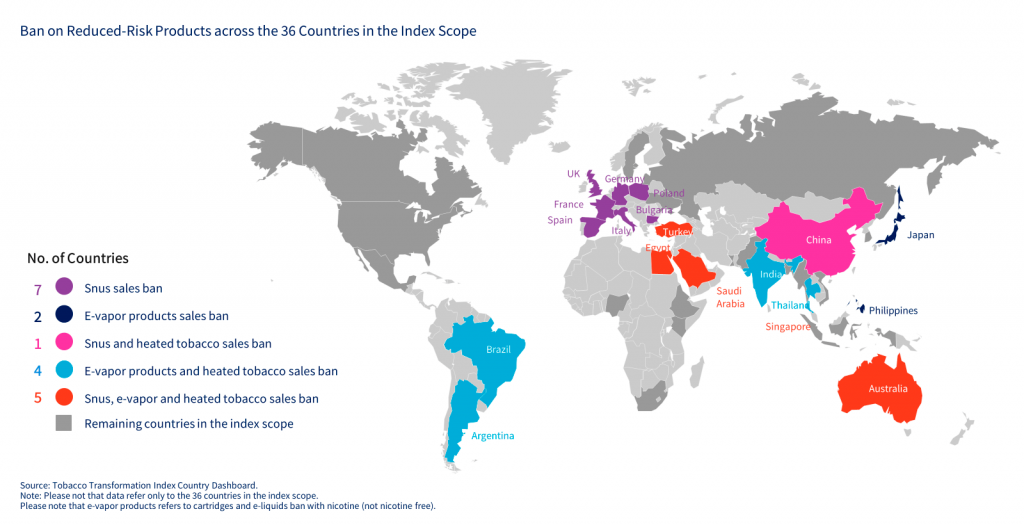